Posted January 13, 2020 in Choosing a School By Community Relations

Peer mentoring between Senior School students and Year 7 students is an important part of life at Wesley College, instilling confidence in our young men.

As a young man, engaging a class of fellow students is no simple feat. This challenge is what the ‘peer leaders’ of the recently introduced Peer Mentoring program were faced with. At the start of the year, students from Years 10–12 nominated themselves to become ‘peer leaders’ and in a few short weeks they were running hour-long activities for groups of Year 7 students.

Before entering the classroom, the leaders were required to partake in a series of training sessions in the first week of Term 1. Spanning across two afternoons, the sessions lasted six hours and revolved around topics such as communication techniques, interaction styles and empathy.

Lynette McGivern, the Director of Service Learning and Leadership, has championed the program with the aid of frameworks and guidance from Peer Support Australia.

‘In the training sessions, there were lots of role plays. The leaders were challenged to think differently and ask themselves: how would the Year 7s think in this situation?’ Lynette said.

This notion of thinking differently is exactly what the program revolves around. By learning to rethink every problem that presents itself, resilience can be developed.

‘It has taught us a lot about resilience. We’ve needed to adjust our thinking and consider how we deliver content to different groups. Even the notion of preparing for and managing a class has been eye-opening. It’s made us think about what our teachers do,’ Bryn Hamersley (11T) said. 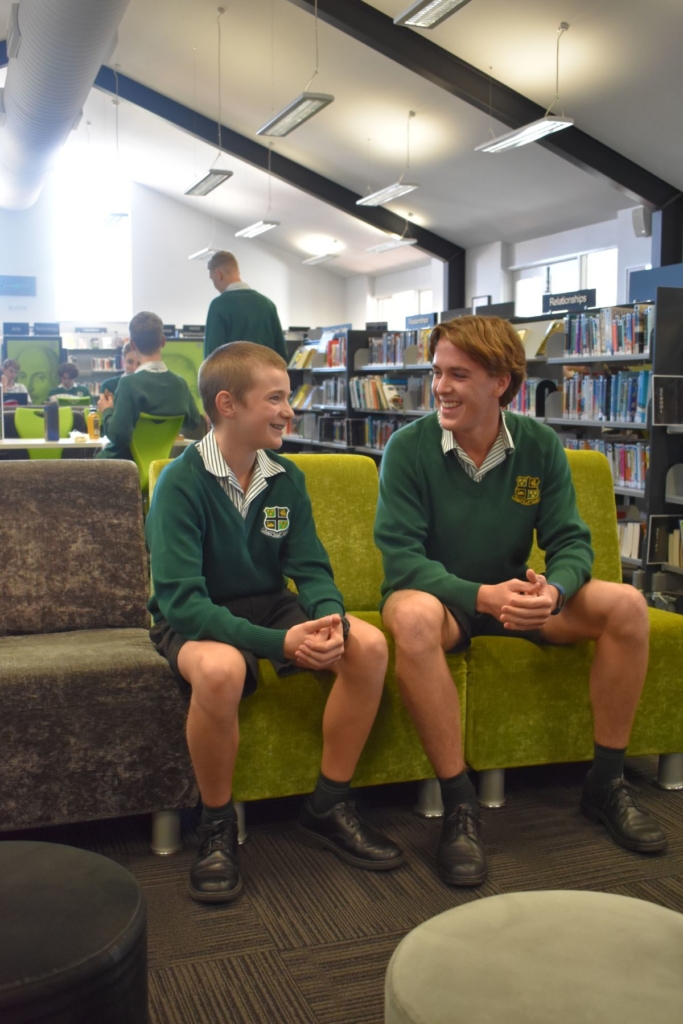 Following the training sessions, the Peer Mentoring process began. With interactive styles in mind, each Year 10 leader was paired up with a Year 11 or Year 12. The pairs were then assigned a group of nine Year 7 students to meet with every Tuesday during the day, running sessions with themes such as growth mindsets and teamwork.

‘The program has been really interesting. We have been forced to get out of our comfort zones with a group of younger students who we didn’t even know the names of to begin with,’ Ben Fowler (10D) said.

‘It’s great that the older students have sacrificed their time to run through the activities and games with us. The mentors have been really nice—they are just normal teenage boys now in our eyes; they aren’t intimidating at all,’ Lachlan Caddy (704) added.

The positive vertical interactions between year groups that have been fostered as a result of the program have highlighted its success. This was clearly demonstrated when the Peer Leaders ventured out to the Year 7 camp, joining in for a day. The full list of benefits, however, are yet to be discovered. When the now Year 7s move into Year 9, becoming members of the Senior School, they will be welcomed by the familiar faces of their mentors.

‘It’s not just about building those bridges, it’s the upkeep that counts. Being able to see the Year 7s each week has helped to develop some really strong relationships. When we walk past them on the campus we can stop and say hello, and that’s pretty special,’ D’Arcy McDonald (11T) said.

Instilling confidence in the young leaders of the College and the community, as well as fostering relationship building, bodes well for the future. The Peer Mentoring program looks destined to stay.

Read more: Open up a World of Wonder at Wesley

Open up a World of Wonder at Wesley

‘In today’s world it is vital we maintain children’s ability to dream, the desire to create and the skills needed to do so. Add to this the capacity to build and nurture relationships and they will possess what is required for future success in this ever-changing world.’ – Mrs Jo Edinger, Head of Junior School.

Read more: 5 Mistakes to Avoid When Choosing a Boarding School

5 Mistakes to Avoid When Choosing a Boarding School

For many families located in rural areas or international locations, the conversation of whether to send your child to boarding school will inevitably be an ongoing topic of discussion. While there is plenty information on the benefits for sending your children to board, it is often a difficult to decide which school will deliver the…