David Gillespie is a lawyer and social researcher, who has been delving into the complex business of the teenage brain and in 2019 released his latest book, Teen Brain. David, who has spoken previously at Wesley College, shares his thoughts here about the issue of teenagers and alcohol.

Too much booze can make us do dangerous and sometimes violent things. Luckily the potential damage is somewhat limited by its sedative effect. By the time it motivates us to perform real stupidity it may well have removed our ability to execute commands.  Except in adolescents. The science suggests that the average 14-25 year old gets all the brainlessness and very little of the sedation. And this can be very bad for how high levels of alcohol affect them and those around them.

After two to three drinks in an hour, the average adult male is feeling very happy and a little disinhibited.  The average adult female can get there on one to two drinks.  They are what most of us would describe as ‘tipsy’.  They’ll have a blood alcohol reading somewhere between .03 and .12.  And they are probably too impaired to drive because their response times, attention and judgement will be sub-par.  This is why being caught driving with a blood alcohol reading of .05 in Australia will get you taken off the road (at least).

If they have an extra drink in that hour (so up to 5 for men and up to 4 for women), then they will begin to experience emotional instability, start to lose their balance, start to experience blurry vision and start to feel drowsy.  Their blood alcohol reading will be somewhere between .09 and .25.  In other words, they are visibly drunk.  This is the point where (good) friends would be ordering a cab and bundling you off home.

Drink any more than that in an hour and you will probably not be able to stand.  If you can walk it will be a stagger and you will be extremely confused.  You will probably forget most of what happens from this point onwards.  In this way, the potential harm from alcohol is somewhat self-limiting.  Before a drinker is in a position to do themselves and others real harm they’ll probably be incapable of any coordinated action and about to fall asleep anyway.

People between the ages of 14 and 25 will probably regard those benchmarks as a load of rubbish.  They would say they can drink way more than that before they are uncoordinated or pass-out.  And they’d be right.

We’ve known for at least two decades, that adolescent rats and mice get more bang for their buck from booze.  They become socially disinhibited and find alcohol more rewarding more quickly.  They are also capable of drinking significantly more before their ability to control their body is impaired.  And they can drink much more before they pass out.  Their blood alcohol readings are exactly the same as adults and their judgement is just as impaired as adults but their body is capable of functioning normally and they will not be suffering a (somewhat protective) bout of drowsiness or unconsciousness anywhere near as quickly.

I’m talking about rats and mice because picky do-gooders think there is something wrong with doing experiments aimed at getting teenagers so drunk they can’t stand up – sheesh!  We are however reasonably certain that the same thing applies to humans because there is a rare 1983 study in humans which produced the same results.  In that study the authors noted that they ‘were impressed by how little gross behavioral change occurred in the (8-15 year old) children…after a dose of alcohol which had been intoxicating in an adult population.’  And, more convincingly, because the relevant wiring is the same in all mammalian brains.

Our reward pathway is controlled in part by the neurotransmitter gamma-amino-butyric acid (GABA), and its receptors.  The GABA system is a multi-purpose suppressor of stuff (technical term).  It stops us entering puberty straight after birth and it dials down dopamine so we don’t become addicted to rewarding things to name a few.

In order to enter puberty, the GABA system is dialed down in adolescents and it takes until our mid-20s to regain normal adult levels.  Alcohol enhances the GABA system.  In an adult, this has a sedative effect.  It impairs our motor-sensory control and makes us drowsy.  But because an adolescent has a repressed GABA system, it has much less effect.  A drunk teen can still operate their legs and fists effectively and can keep drinking well past the point an adult would be forced to stop (by unconsciousness).  This is likely to be a big part of why, according to the latest Australian National Drug Survey, the average 20-24 year old is 35% more likely than a 25-34 year old to have been a victim of alcohol related physical injury in the last 12 months. 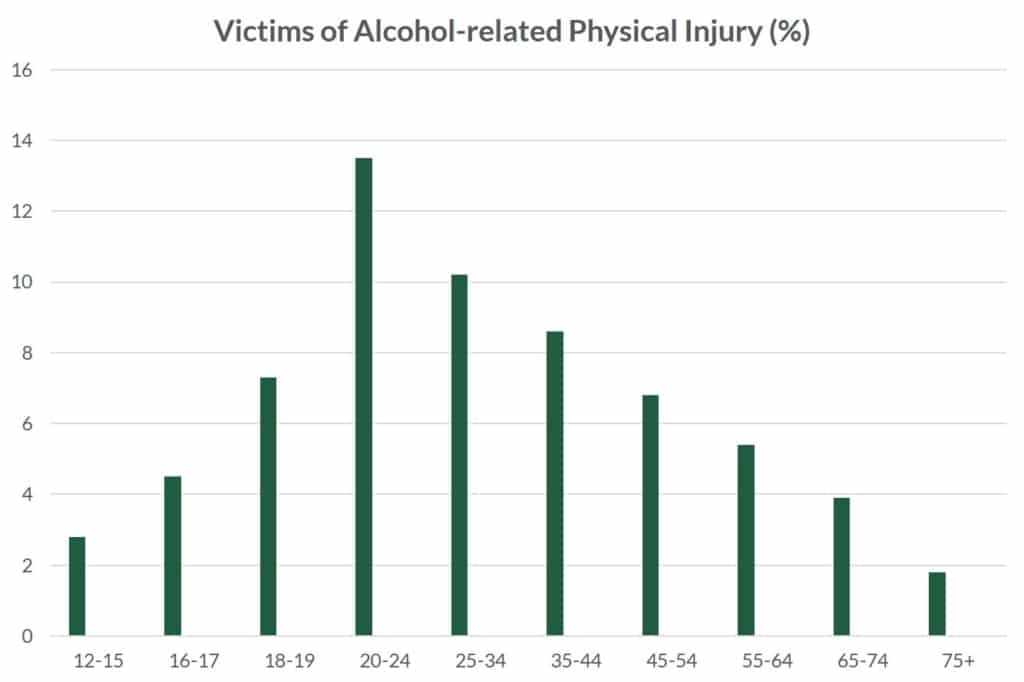 There are longer term impacts as well.  Regular drinking means the body adapts to the alcohol enhanced GABA system and doesn’t bother increasing its capability on its own.  This means that the GABA system remains impaired for the rest of their lives, making them chronically prone to addiction, anxiety and depression. Oh, and expensive drunks.  It seems that if alcohol prevents the GABA system being properly enhanced in adolescence, it never is.

Kids should not drink heavily for lots of good reasons but perhaps one of the best is that, unlike with adults, their ability to perform stupid drunken acts is not impaired by consuming the large amounts of alcohol that would motivate them to do so.  Very drunk teens will not stop drinking until they are in territory where alcohol can do real and permanent damage.  And they will be fully physically capable of doing harm to others well after their parents would be out cold on the living room floor.  Vigilance is not optional when it comes to adolescent drinking.

Read more: Is my child addicted to gaming?

Is my child addicted to gaming?

Today’s parents have children that play Fortnite and similar games, often to the degree that prompts the question “Is my child addicted?”

Read more: How do we approach wellbeing at Wesley College?

How do we approach wellbeing at Wesley College?

Mr Phil Collins, our new Director of Student Wellbeing, looks at how wellbeing and personal growth is an integral part of life at Wesley College.