The Promise of a New School Year – can a leopard really change its spots?

Can a leopard really change their spots or are we all just a work in progress? Maybe some just more publicly than others? Our Director of Service Learning and Leadership, Lynette McGivern believes so.

Over the last few months, anyone interested in tennis would have noticed a change in the public face of Nick Kyrgios. He and ‘the Demon’ ecstatically hugging and falling onto the floor after the Davis Cup win, his emotion when talking about the impact of the diabolical bushfires that consumed Australia and the aces for bushfire relief movement he started amongst players at the Australian Open. Watching him up close on Saturday night – a rare treat against an awesome Karen Khachanov, experiencing the rock concert atmosphere, and watching from the front row, made me think about whether this new Nick is the real deal or whether it’s just an attempt to change his largely poor public image – too little too late. It made me think of the start of the school year and how it presents the opportunity for all us to make a fresh start and change our spots. Will it last just for that first week, before it becomes easier to seek the comfort of old habits?

Young people have a great capacity for change and I firmly believe they can achieve great things with a clear goal, endeavour and a willingness to listen and learn from others. So if you are wondering if this is the year you can improve that grade – absolutely. Take up an instrument – give it a crack. Volunteer more and mentor other students – why not? 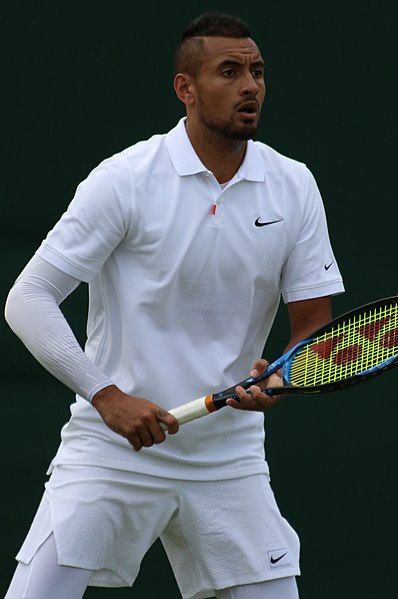 Your teachers certainly think you can change your spots but it has to come from you.

There were a few brief deviations from the new Nick on court at Melbourne Arena on Saturday night but I really wonder how long it will last. The new Nick was well-mannered to the ball kids (even when they weren’t quick enough to bring his towel), he signed autographs and took selfies in practice on the outside court only an hour before the match and he only blew up at the chair umpire once – never a good look. That was in response to a warning for taking too long to serve (he was wiping the blood from his hand after diving for a shot and breaking the skin). Even after his 4.5 hours on the court, he took his time to leave – gave away all his towels to an adoring crowd and again posed for selfies. At a particularly tight spot in the match, disappointed by a lack of obvious cheering from his team, he screamed at them ‘So you all just gonna play d now? Get up for me!’ It was an attempt to shift the spotlight from his mistakes to others, not a great example of personal responsibility or self-management but certainly an expression of frustration.

So can a leopard really change their spots or are we all just a work in progress? Maybe some just more publicly than others?

Old people (like parents and teachers) have great capacity for telling young people what they should do! However, if there is one universal piece of advice that rings true, as boring as it may seem, regularly doing the small things well and sticking to the plan is how improvement happens. Unlike Special K, you get the chance to do this without the world watching – just maybe your parents and your teachers.

No doubt, Kyrgios is a work in progress (and I certainly think he has a long way to go) but on Saturday night, he did many of the small things well and stuck to the plan. So while you may think that your parents and teachers are sometimes stuck playing d, just remember, when you exhibit endeavour, when you grow perhaps even succeed, they don’t necessarily need to be on their feet for you to know that they support you.