Graduation is an unusual moment. For you, there is an overwhelming feeling of having completed the task. You worked incredibly hard; you have made it through school. Job done. And you deserve that feeling, as a lot was asked of you and you rose to the challenge.

Each of you has a unique story, each of you has had your own triumphs and challenges. I celebrate all of you and everything you have achieved.

But, for those of us with a few extra years on the clock, there is an additional feeling. We are immensely proud of all you have done, but we know that – despite this celebration – this is not the end for you, it is only the beginning.

You have equipped yourselves to take on the world – but now you must go and apply your knowledge.

You need to set a new range of targets for yourself and begin your next round of endeavours. As former US President Barack Obama once said: ‘Fight for your seat at the table. Better yet, fight for a seat at the head of the table.’

Of course, those tables can seem impossibly far away.

It does not matter whether your goal is art, agriculture, accountancy or academia – to get to the level where you have recognition, where you can make a difference, is difficult.

People sometimes liken it to the story of David and Goliath, where you are the underdog graduate and massive corporations are the giant. What chance do you have of getting in and getting ahead?

However, people often forget to think about the reality of the David and Goliath story, so here is a quick recap.

The winner of the fight wins the whole battle.

Saul is afraid. I mean, Goliath is big. Six cubits and a span. It’s okay, I had to Google it too. It’s a shade under 10 feet tall.

David, who’s just a young boy bringing food for his older brothers, can’t believe that nobody is willing to take on Goliath, so he says he will give it a go. After all, he’s done a bit of shepherding and fought off bears and lions. How hard could it be?

Saul offers David his armour, which David declines, taking only his staff, his sling and five stones. David and Goliath confront each other, Goliath with his armour and javelin, David with his staff and sling. They exchange a few words that you can enjoy in Samuel 17 and then David hurls a stone from his sling, hitting Goliath in the centre of his forehead.

One shot. Crack! Goliath is dead. The Philistines flee, the Israelites win and David goes on to become King of Israel.

Well, we have all heard the story a hundred times, and we all take it on face value that David stepped up and took out Goliath with one shot. What isn’t discussed is the hours and hours of practise that David must have put in with his sling to develop skills in which he knew he could trust.

We don’t talk about his quiet confidence, how – despite his young years – he carried himself with self-belief but, importantly, not arrogance.

And, in a very literal sense, when David’s opportunity came, he took the shot!

Right now, you are David. You are sitting here today with skills that are innumerable, varied and great. You have plenty more to learn, but you have put in the practise. You should not be afraid to go into the world and take on challenges of every size to get where you want to be.

However, you must wear your confidence lightly.

In addition, you – Class of 2019 – are a great cohort. I haven’t had long to get to know you, but upon meeting you it was immediately obvious that we are sending men into the world who will put the focus on integrity, honesty, knowledge, skills and commitment wherever you go.

When you and your families originally made the choice to become Wesleyans, one of your first purchases was a backpack upon which was printed our version of John Wesley’s family crest.

That crest was not just there as a decoration but as a symbol of the deeper, more fundamental values that we represent. Everything has meaning; the shape of the crest is a shield, to represent protection. The Wyvern represents strength. Three scallop shells honour the Holy Trinity. 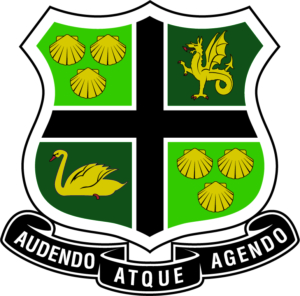 But why scallop shells? This is the part I find most interesting. The answer is that the grooves on scallop shells, which meet at a single point, represent the various routes pilgrims travelled, to arrive at a single destination.

And, sure, you have been through a few backpacks since then, but the crest has been a constant, reminding you – day after day – that we all travelled a different route to get here, but Wesley is our bond. For years now, this has been your destination: a place in time that will forever anchor you together.

As a group of young men, you have created a community within your peer group. A community of respect and support for each other that I hope will last for life. Whether you were boarders or day students, you are now inextricably bound.

So, take a leap into the world, take on giants, you may stumble from time to time, but we and your classmates will forever be a network that will support you and lift you up again.

I wish you well, young men; it has been a privilege to make this speech to you as your Headmaster.

I will end by saying what they probably said to David… go out there and take your shot!