Wesley’s commitment to Aboriginal and Torres Strait Islander scholarships has seen dozens of boys seize the opportunity to expand their horizons.

Educational outcomes for Aboriginal and Torres Strait Islander students have long been plagued by poor attendance, health, intergenerational poverty and disadvantage. Wesley College, over the past 10 years, has seen remarkable achievements in this area and, in many ways, illustrates what success can look like when strong leadership, hard work and proper allocation of resources come together.

The result is the College’s Indigenous Pathways Project, which has now seen nearly 100 Indigenous students through their schooling journey.

The project was designed to provide an authentic and informative cultural experience for both Aboriginal and non-Aboriginal students. The College encourages Indigenous students to commit to being part of the ‘Moorditj Mob’ and build strong narratives of what it means to be a successful young Indigenous man and show a real commitment to their culture and to teach others.

One such student is Elijah Bennell (12T). For him, being a member of the Moorditj Mob has opened up a world of new experiences:

That sense of commitment is something that comes through again and again with the Moorditj Mob, both in terms of the support the members of the Mob show to each other but also in the pride that the boys show in sharing their culture with others. 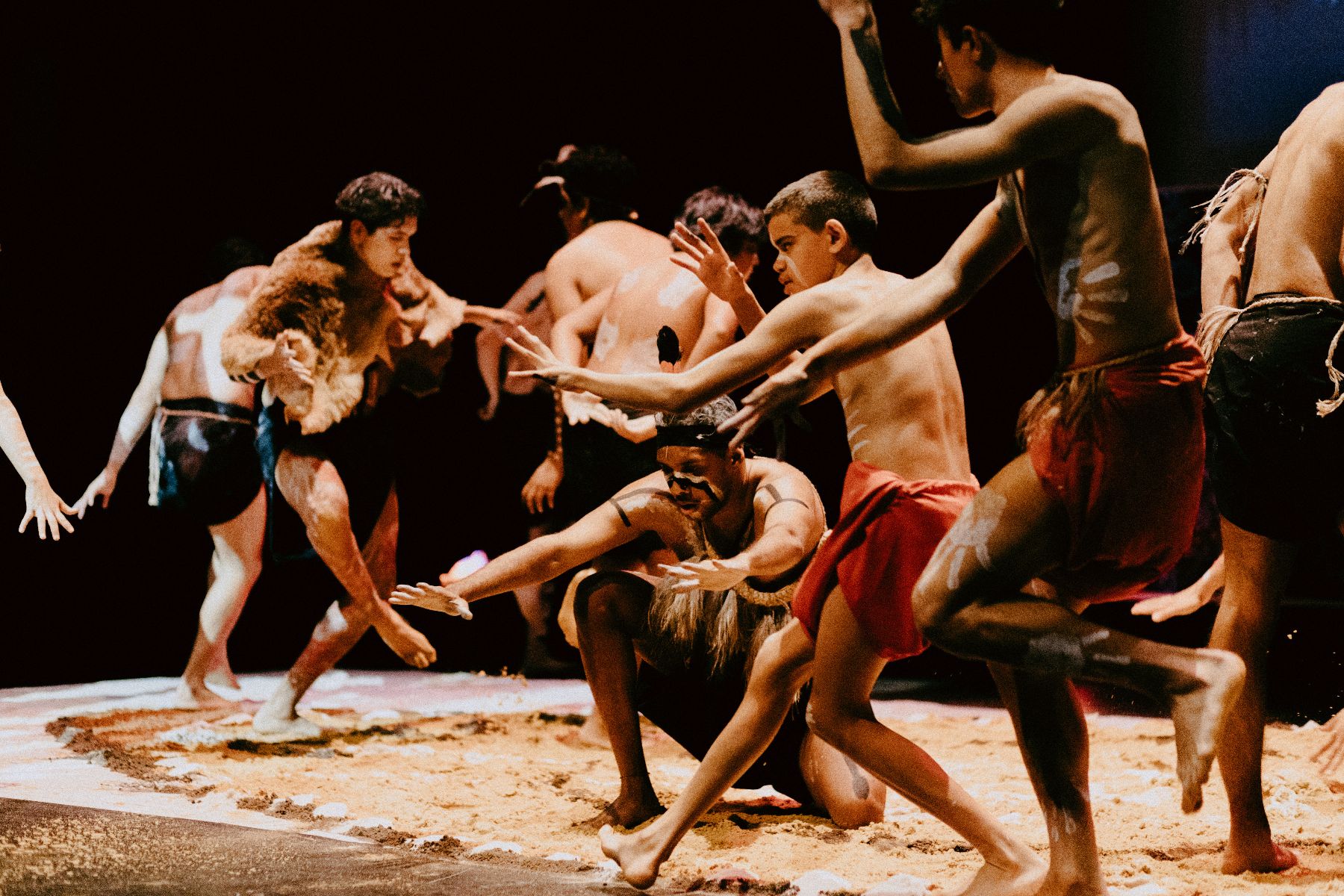 The most obvious form of this is in the cultural dancing the boys undertake around the country.

Over the last year they have performed on more than 100 occasions, to more than 25,000 Western Australian students. The boys travelled internationally too, to talk about their lives and what Indigenous culture means to them, and to Australia, in the modern day.

All of these performances and workshops—while also attending school—would be an effort for any student, but the Moorditj Mob members enjoy the experience and the wide range of relationships that they end up building.

The proof of this is in the many success stories that have come from Moorditj Mob students after leaving Wesley.

One typical example of an Old Boy is Quinton Narkle (11–15). Since leaving the College he has become a player for the Geelong Football Club in the AFL.

Quinton believes the Indigenous Pathways Project made a big difference to his life. He says: ‘For many of the Indigenous boys, coming to Wesley is a very different environment from their previous education.’

‘It’s hard to adapt and understand what is expected from you, but a program like Moorditj Mob helps ease that transition. The program is the backing to many Indigenous boys graduating from Wesley, supporting them through their high school years by being committed not only to their education but their personal development and wellbeing as well.’

For Quinton, the mob became his support base while at Wesley, a place of comfort and familiarity that connected him to home.

‘It provides a second home for many of the boys, a brotherhood that you’re connected to forever and enabled us to still be connected to our culture. Not only did Wesley allow us to continue the practice of our culture but, for many of the boys who weren’t connected as much to that piece of their life, they provided them with cultural knowledge, pointed them in the right direction to start and encouraged them to get involved.

‘Those who did get involved were afforded many great opportunities and had amazing experiences. I myself was able to travel to Hawaii to share the story of my people through cultural dancing with the Indigenous people of the world, an experience I will never forget.

‘I still maintain very strong relationships with both Ms Lynn Webber and Mr Ben Lewis, the Indigenous Coordinators of Moorditj Mob; still keeping in contact and having them as support as well.’ 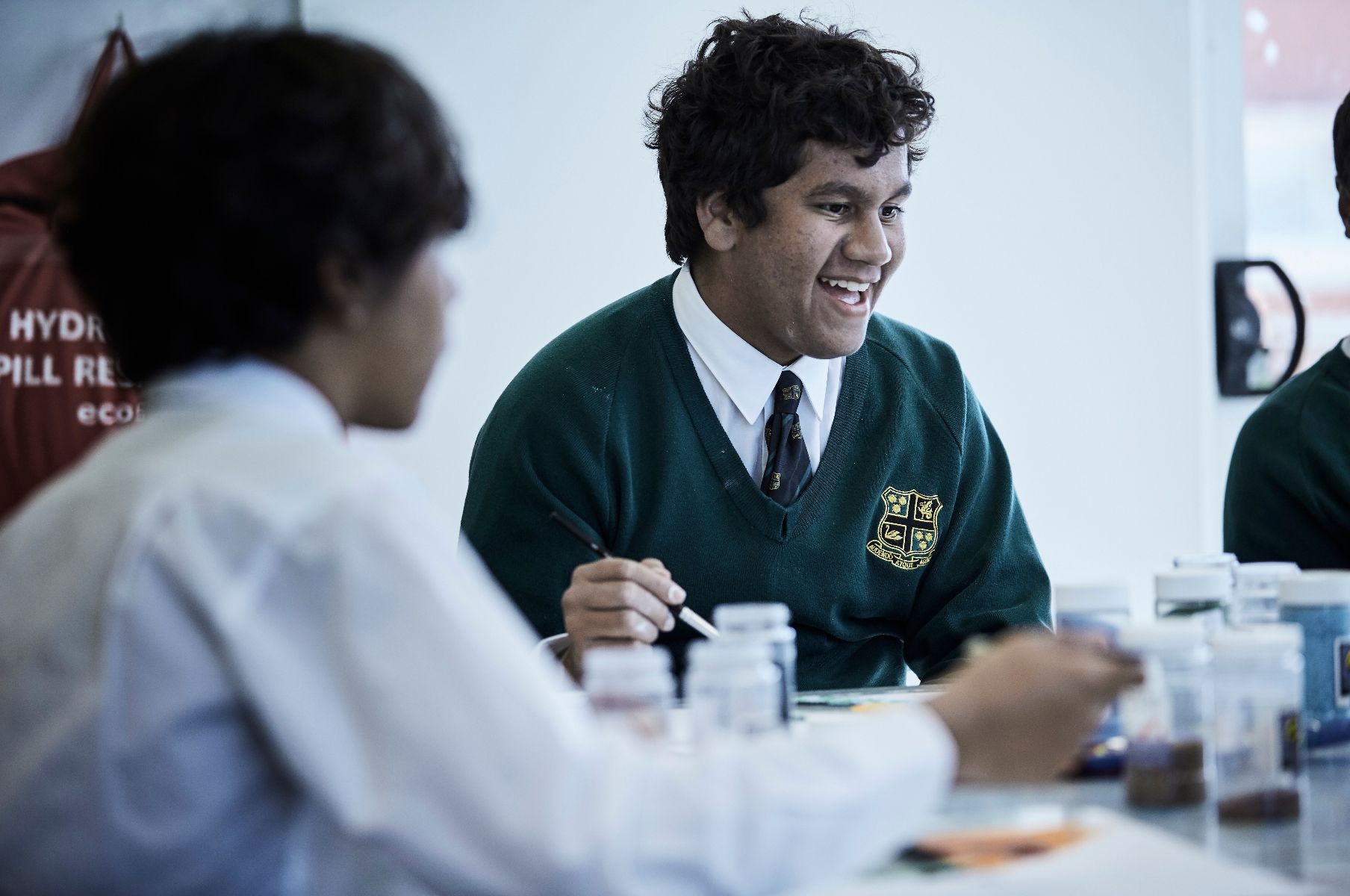 The commitment shown not only by the boys, but also by the College is something to celebrate. Especially the role that Indigenous Program Coordinator, Ben Lewis, plays in the development of our students. Ben frequently goes far beyond the expectations of his job, acting as more than just a coordinator, but as a mentor.

‘Working with the Moorditj Mob students and their families is a great privilege,’ says Ben. ‘To be welcomed into communities time and time again allows me to facilitate opportunities for Wesley College students to fully engage with Aboriginal and non-Aboriginal people which in return allows students access to both a mainstream and cultural education.’

The paternal type role that Ben displays every day, makes the Wesley Moorditj Mob a successful program by the depth and strength of relationships he establishes in the program. As the boys perform and deliver workshops in the heat, the cold, early mornings and late nights, Ben is the person taking the boys to each location and helping organise the events.

‘Before starting at Wesley College I couldn’t imagine some of the experiences I have shared with these students,’ Ben smiles. ‘From watching in awe as the boys performed in the middle of Times Square to almost freezing in a swag while visiting local and remote schools around Geraldton. Sitting in hospitals, or next to students on buses, trains and planes for hundreds of hours has given me insight and energy to keep working in partnership with the community to ensuring these students have access to every opportunity available.’

The project has also seen non-Aboriginal students and staff gain a deeper understanding and appreciation of Aboriginal cultures. National Reconciliation Week and this year’s theme ‘Don’t Keep History a Mystery’ identifies the importance of learning about Aboriginal Australia. Wesley College is unique in having access to such a vast resource in the Moorditj Mob Cultural Centre—students and their families right here, within our own community.

The Boarding House plays a vital role in the facilitation of the project also, as a high percentage of the boys who become a member of the Moorditj Mob, move into the Boarding House. The Boarding House provides a stable and warm environment where students are encouraged to focus on their culture. Non-Aboriginal students who board, are advantaged as they live and learn with a diverse group of Aboriginal students. By living together, all boys have the opportunity to gain exposure to the benefits of a multi-cultural society which prepares students for life outside of school.

The project is one example of many within Wesley that is heavy in commitment. The commitment from Indigenous students and their families to their culture is something the College is very proud of. The facilitation of this project is also something Wesley identifies as being of high priority and a program that will continue to be an important part of the Wesley College community into the future.

This article first appeared in The Wesleyan. To see the magazine in full, click here.