Internationally-renowned jazz trumpeter – and Old Collegian – Mat Jodrell (90-96-97) was kind enough to offer his wisdom at our Scholarship Celebration. Here we share some excerpts from his Q&A.

Trumpeter Mr Mat Jodrell is one of the most exciting voices in jazz today. He took up the trumpet at 10 years of age and received a music scholarship at Wesley. He attended from 1990 to 1995 where he quickly became lead trumpet in the College’s concert band and jazz orchestra.

Mat’s rise to prominence happened quickly, playing at Carnegie Hall at 16 years of age and receiving the Young Australian of the Year Award for Western Australia. At 18, Mat received the James Morrison scholarship for most outstanding young Australian Jazz instrumentalist, before completing his studies at the prestigious Juilliard School of Music in New York.

We were very lucky to have Mat beam in from Melbourne to address our 2023 scholars and take questions from Head of College, Mr Ross Barron, and scholarship students Lachlan Edinger (Year 10) and Hamish Macdonald (Year 11). 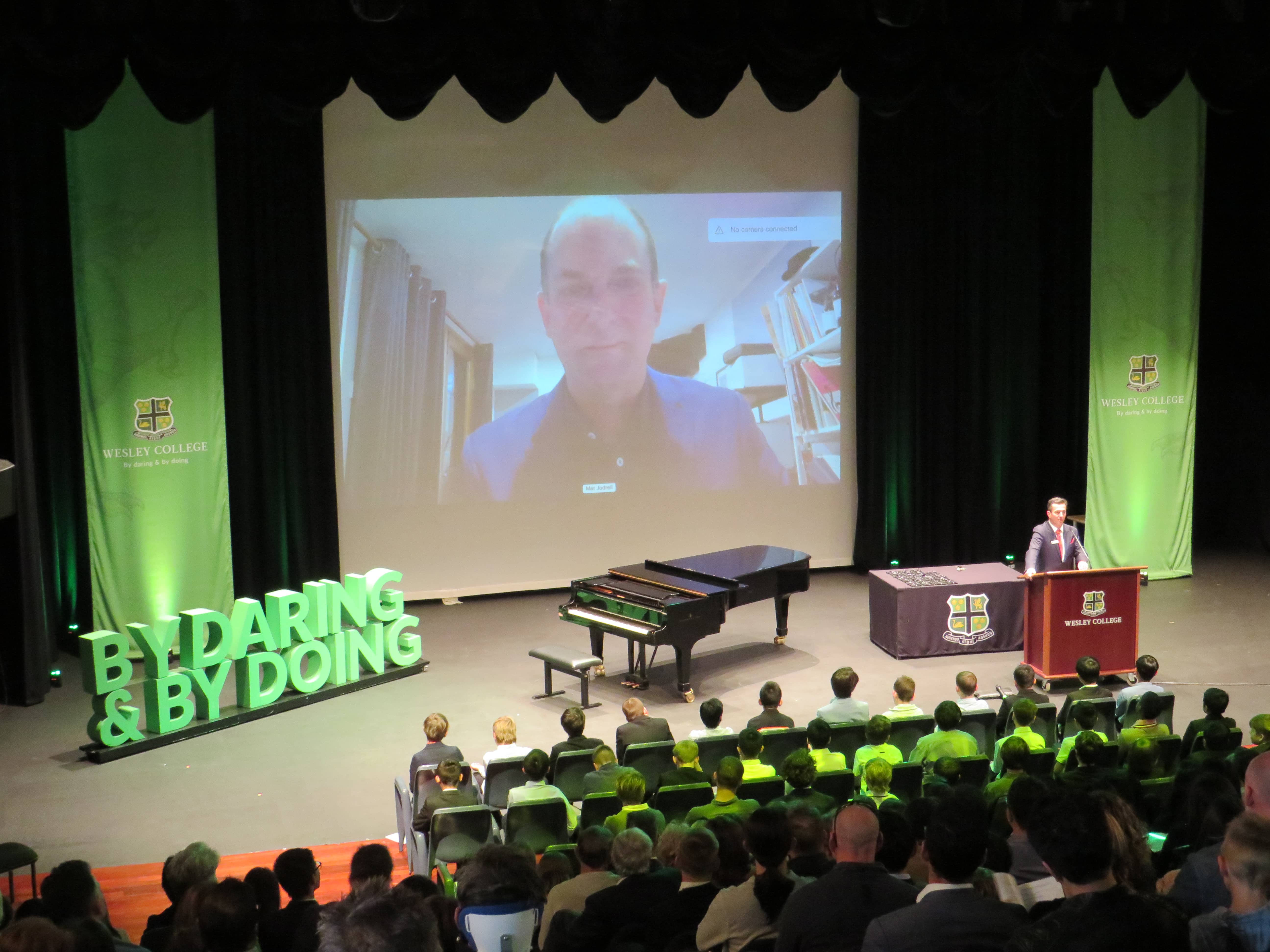 RB: I’ve heard you practise for eight to 10 hours a day. How much of your ability is talent and how much is hard work?

MJ: I think I may have been blessed with some good ears; I could always hear pitches pretty well. But it’s totally the work part. That is the main thing. I don’t think any of the people that we idolize didn’t do a hell of a lot of work at some point. And so the talent part is such a small amount. It’s like, it may make the entry into any field a little easier, but you need the work part – if you don’t have that it’s not going to work out.

RB: Are you still following your passion, where you feel as if you don’t work?

Yes, I’ve still got the same drive that I had when I was younger, I just have a lot more on my plate now. My advice would be that this is the time – when you’re at school – that you do that work. It’s the groundwork for everything that you do coming up, because your time gets less and less so you have to be more efficient.

RB: Do you remember your time at Wesley fondly?

I remember my time at Wesley so fondly because music was all so new to me. I couldn’t listen and play enough. It was just all-consuming. But it was joy, you know, like the joy in learning that for the first time. I would transport myself back there anytime because of that feeling of excitement about learning something that I really loved. I couldn’t remember that time more fondly.

Oh, they’re not normal! I mean, this weekend was the first time in three years that my wife and I have gone away together. We played a concert together, which was great because we never play music together anymore, unfortunately. But we were able to record something together for the ABC.

Every day is different. It’s teaching through the day and then, and then performing at night. That’s usually the schedule. But the schedule is kind of ridiculous. Your life is music and you, it’s definitely not nine to five.

RB: I saw you performing at the memorial service for Shane Warne. Do you still gain the same enjoyment performing now as you did as a teenager at Carnegie Hall?

Absolutely. It’s exactly the same. Probably more as time goes on. I love it more and more, I would say.

LE: I’m sure you were told along the way to come up with a plan B… but did you?

Plan B? I guess I could have had a Plan B, but I didn’t really! Life without music to me was not an option. I mean, if I couldn’t play the trumpet I just would play another instrument. Like, if something happened to my teeth, I would play the piano. If something happened to my hands… I don’t know… I’d play the kazoo! I’d figure it out. Whatever I did, it would have always been to be to do with music, because it’s always fascinated me. That thing of sound waves coming and making an emotional connection with us as humans is just such a bizarre thing. That’s just fascinated me from the beginning.

HM: You’ve played with some of the modern-day jazz greats such as Herbie Hancock, Michael Gordon, and James Morrison. Who would be in your supergroup?

Well, Herbie is number one for me. The fact that I got to play with him, that’s pretty much the pinnacle for me. His music has been a huge part of my life, so that was incredible.

There are heaps of great musicians that I haven’t played with, just tons of them. But yeah, I’ll just slowly keep ticking off the boxes. I got to play with Lalah Hathaway the other day – her father, Donny Hathaway, is my favourite singer of all time. He’s no longer with us, but his daughter is – flying the flag of Donny’s music. I was very happy to do that. Like I say, I’ll just keep ticking off the boxes. 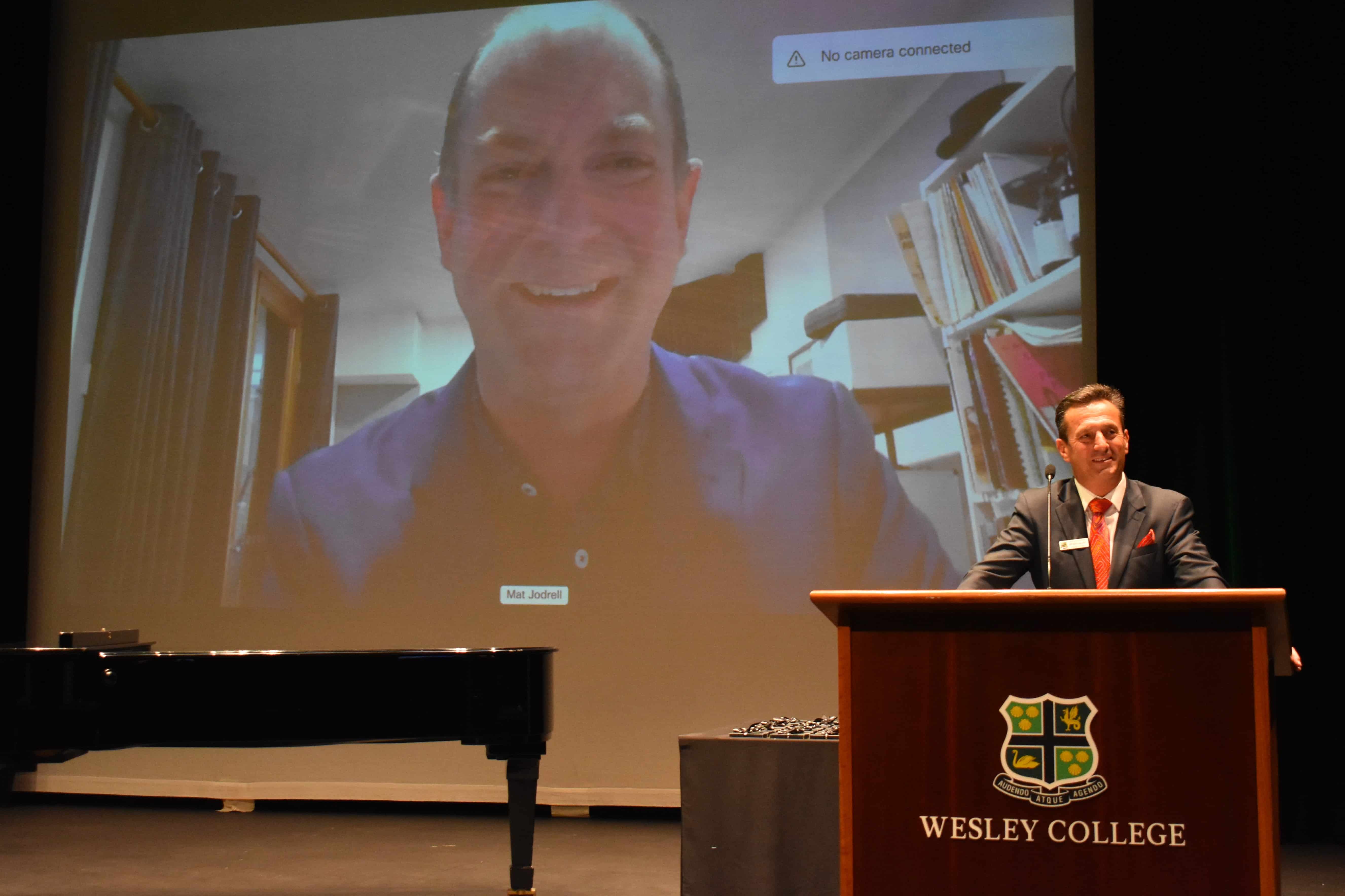 LE: Do you remember your first day at Wesley?

Oh, wow. It was, it was halfway through year five. I don’t really remember my first day. It was all a blur – but a very good blur. I remember primary school being really incredible. The level of education was so different and the hands-on approach at Wesley was just so different to the school I’d come from. Wesley just had that other level of commitment to the students and I feel like I really took off.

HM: As a final question, what advice would you give to your 13-year-old self?

Well, I went on the path that I was going to go on and I just kept doing it. I think that you’ve just got to keep doing it. You’ve got to stay in it. So that would be my only advice because I think, especially in the Arts, it’s longevity. It’s not burning out. I got very close when I was younger because I went so hard so early that I could have burnt out. But that’s another thing that I love about the Arts: it’s a lifetime pursuit. The older you get, the better you get. It’s about staying in it, staying inspired and keeping on learning.

Wesley College’s Boarding Captain, Max Nield, gave a fun address at last week’s Father and Son Breakfast, recounting the memories of one of our oldest former students!   Opportunity is all it is. Each lesson, each word, each drill, and each rep is just an opportunity to get a little better. In these times it’s…