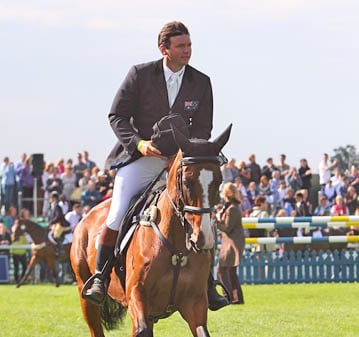 Born in Moora in 1967, Clayton Fredericks came to Wesley in Year 8 in 1980. He first discovered cross-country at the age of 16 when he entered a pony club tetrathlon, an event based on the Olympic modern pentathlon and which consists of riding, running, shooting and swimming.

Clayton’s sound practical horsemanship and general athletic ability stood out and sparked a passion in him that set his career direction.

After moving to the UK at age twenty-two, Clayton competed regularly at the biggest competitions in Europe. His first major breakthrough on the world stage was in 2006 with an individual silver and team bronze at the World Equestrian Games in Aachen.

At age thirty-one, Clayton was selected for his first Olympic Games when he represented Australia at Beijing 2008. He performed outstandingly and won a silver medal as part of the three-day eventing team. Four years later he was part of the London 2012 Olympics equestrian eventing team.

Not only has Clayton competed at the highest level, but he has also served in the role of coach for many teams. His most recent position saw him relocate to Ocala, Florida where he was appointed coach of the Canadian eventing team for the term 2013–16. Clayton continues to reside in Ocala, running his business Fredericks Equestrian International and competing his horses at the highest level.