Opportunity is all it is. Each lesson, each word, each drill, and each rep is just an opportunity to get a little better. In these times it’s rewarding to reflect on how far each of us has come, our dads will know – being the ones who changed our nappies and watched us take our first steps.

I can say, for one, that the last six years have been a bit of a spring breeze – both hots and colds but all the most enjoyable. It’s the Period 6 lolly pops, singing Lord of the Dance, PE with your best mates, lunchtime footy and all the other general banter that comes to mind when reminiscing on the journey.

Mind you, let’s not forget the kindergarten tears, the injuries, being on the losing team, the failed maths tests, saying goodbye to a mate for the last time, the school fees, the last 15 minutes of English, the heartbreaks, the lost things, the forgotten lunches, the wrong socks, having to shave, the tiredness and messy kitchens. All good things come with a few hard times, but they have made it all the more special.

It’s weird to think that 100 years ago, men our age went to war, or worked in factories and on farms. We are now the next generation, graduating today. I could go on to say about how most of us couldn’t cook eggs or last a day without reception, so you have to ask yourself, what’s changed? 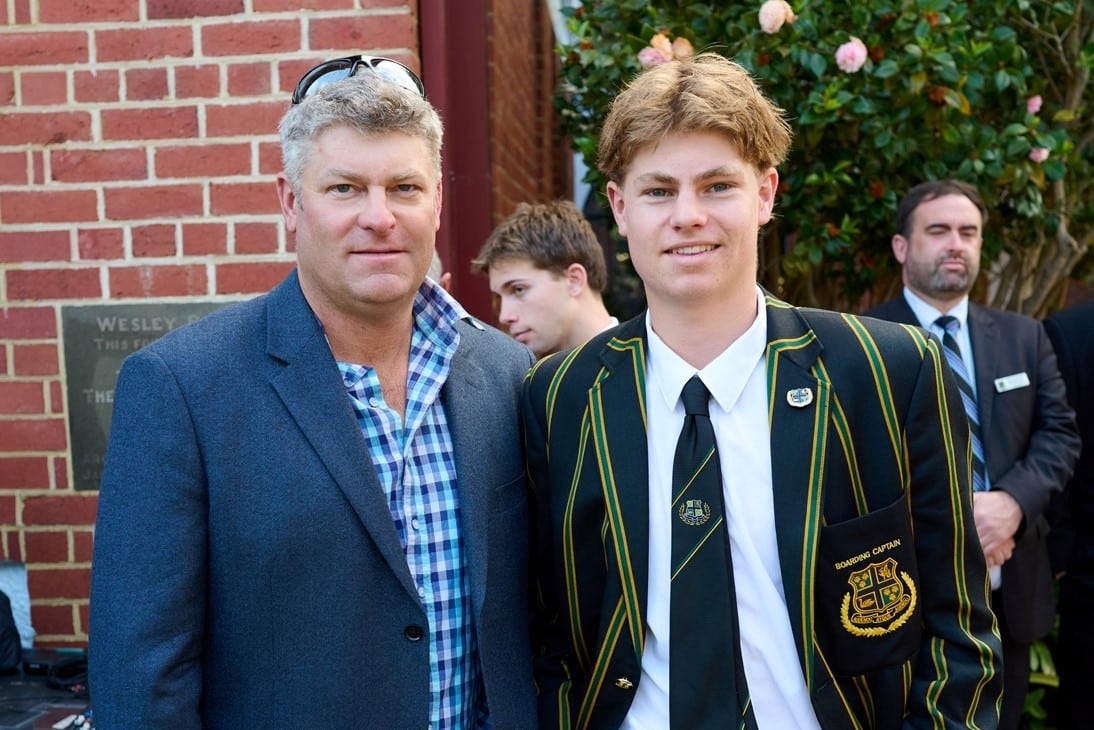 Uncle Ted Mouritz, my great grandfather’s youngest brother, was a Wesley boy, in Moflin. He graduated in 1954, almost 70 years ago. Ted was boarder, who called Hyden home – originally living only 30km southeast of my home farm. Ted was the youngest of four siblings, all boys, and was the only son to be sent to secondary school. In his day, according to Ted, education wasn’t as much of a value. Most educated jobs, such as farm adviser, didn’t have an industry to even make a living and, as a son, you generally followed in your father’s footsteps. Ted’s father had finished school at 14, which is our Year 8, and had pioneered his own block of land In Hyden by 18. Reading and writing were the only basics needed.

Ted made the journey to Perth in the late 1940s, as an 11-year-old and he lodged with his father’s mates, who were complete strangers to him. He said to me that by the time he got to Wesley he felt as if he had emotionally left the family. Ted explained that when he arrived in 1949, Wesley was only just joining the PSA – which we officially did in 1951 – and the College had built quite a reputation both academically and in sport by the time he left. Ted was at Wesley for five years, during which was a very successful academic, dancer and made the 1st Rowing and 1st XVIII Football team.

During these five years, Ted claims that not a single family member of his attended a Wesley College function. No sports games, no dances, no assemblies, nothing.

It is a privilege to have our fathers with us today. A privilege to stand next to my Dad and share our last name, share our respect and values. I know for sure my Dad wouldn’t miss a game I was in. The people next to us truly have our back in the toughest times. 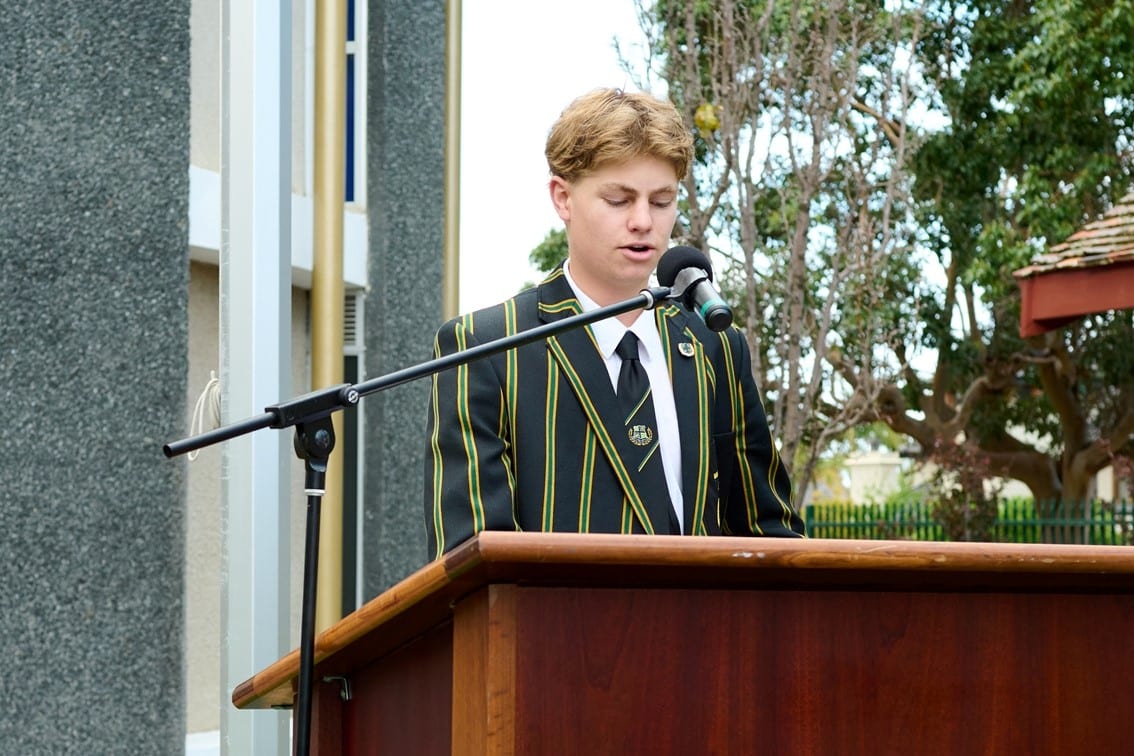 Anyway, back to Ted.

Ted did tell me a funny story actually, about sneaking out to a dance in the City. He said he only had one nice outfit, which was his school uniform, so he decided to tear off the front pocket of his blazer, which has the crest on it, and went off dancing happily. It kind of reminds me of another story from Year 10 PC camp, but we won’t get into that!

Ted told me that boarding was out of sight now, compared to his day, and he explained that there were only cold showers, except on Wednesday after sport. All the boys would line up, have their 30 seconds, and then get out. Ted explained the 20-bed dorms have no comparison to our luxury today and the boarding food, despite our complaining, is a thousand times better. He said he was hungry for the whole five years! 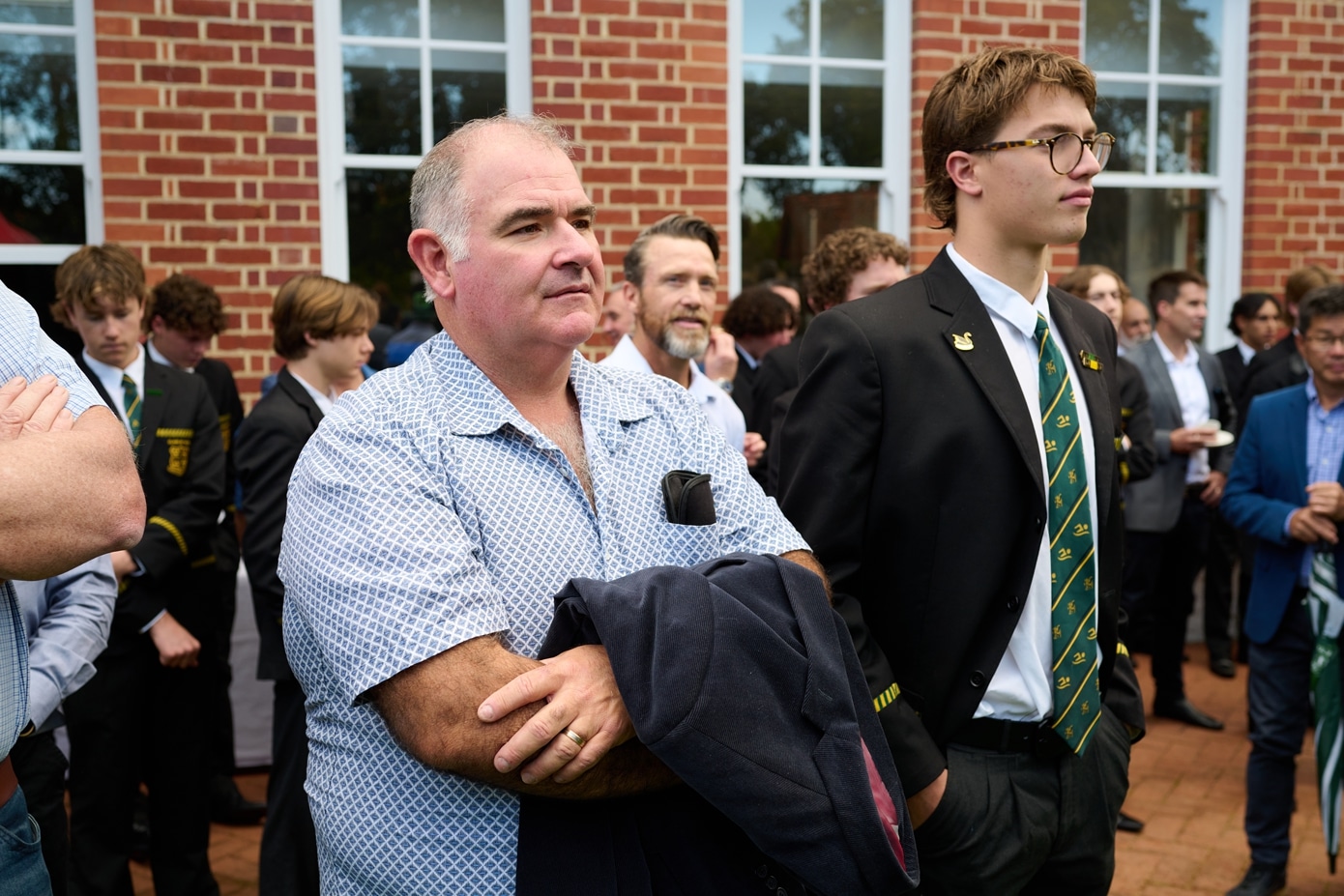 So why, why is Ted’s story important? Well, when Ted left school, he was struck with ‘what’s next?’ before he pondered many Uni degrees. Agribusiness to Commerce, to Arts to Theatre, to Economics to Management. He didn’t fret about what direction he was going in, as long as he was learning. He trusted the process. “Each next thing ended up preparing me perfectly for the future, I kept doing things until I found myself most useful,” he said. “Being useful was something Wesley taught me.” At 30, Ted had weaved in and out of a mountain of jobs and found himself managing multimillion-dollar projects for BHP all over the globe.

You see, Ted is a doer and is not afraid to do so because at Wesley that’s all we know.

Things take time, a pursuit day in and day out. It’s a slow process that has setbacks, but one bad move doesn’t mean a bad journey.