A chat with Steven Heathcote AM

Guest of honour at our recent Scholarship Awards evening was celebrated ballet dancer Steven Heathcote AM. Here’s an abridged transcript of his chat with Head of Wesley College, Mr Ross Barron. 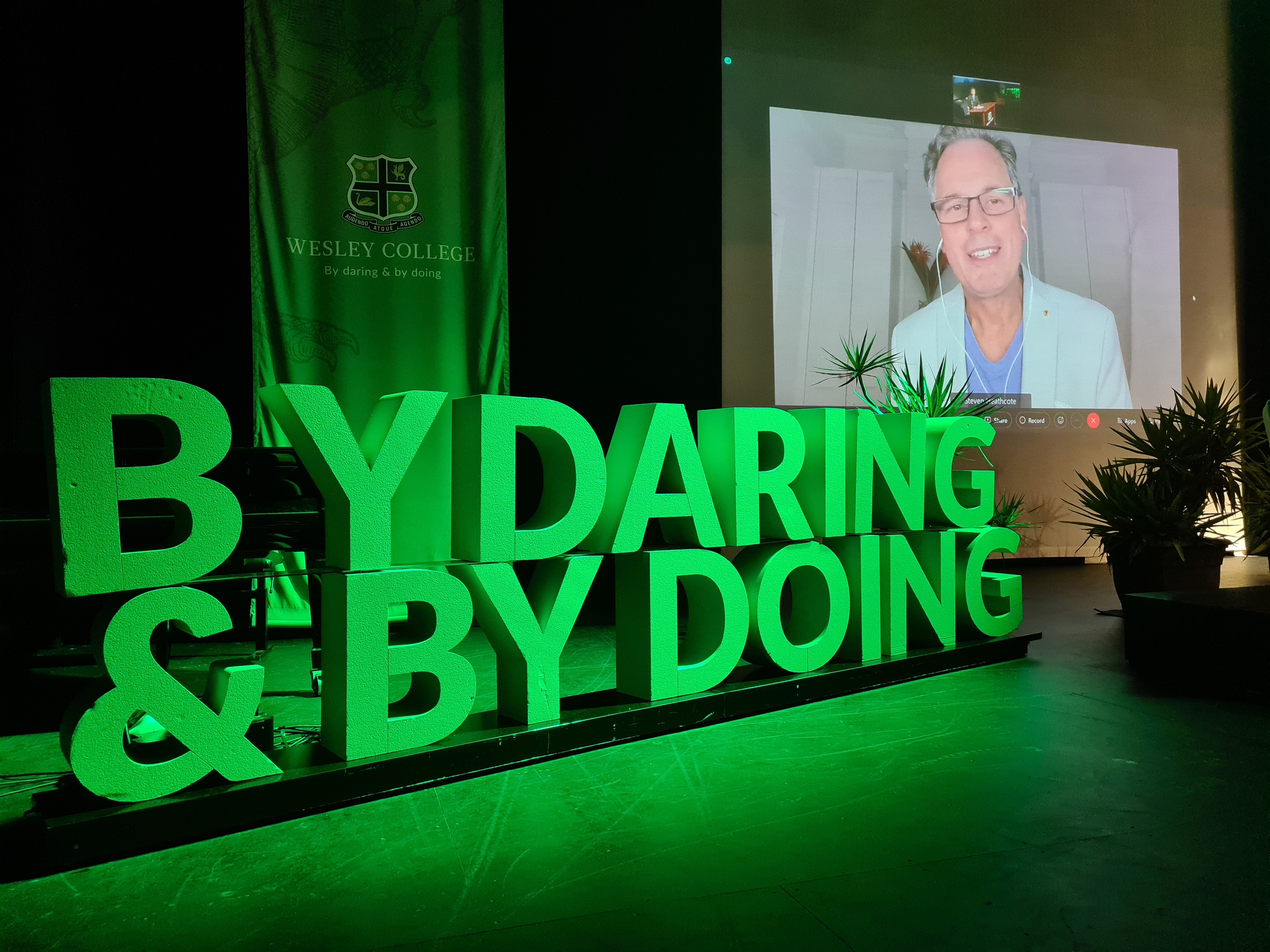 Steven Heathcote AM was born in Wagin in 1964 and started school at Wesley in 1977, after being awarded the Howard Bantock Scholarship. He started ballet at 10 years of age after a College excursion to the West Australian Ballet. At Wesley, Steven met drama teacher Glen Hitchcock and English teacher Jean Bamford. Both teachers recognised his talent and set out to equip him with the basics of theatre.

What are your favourite memories from your time at Wesley?

I was there for three years. It felt like a short time and a long time in the same breath. What I enjoyed the most was the comradery with the friends that I made there.  I was very fortunate to attend Wesley because there were a lot of opportunities that I may not have been afforded had I gone to a state school – and there’s nothing elitist about that whatsoever. It’s just that Wesley had – and I’m sure still has – a focus on diverse activities and learning opportunities for the boys. I really benefited from the wide range of experiences that I was able to have.

The Arts really is such a strength of the College. Was it the case in your era?

The drama stream at Wesley was really very strong. Glen Hitchcock, who was the drama teacher at the time, was a big influence on me and a lot of the other boys. He was just a fantastic teacher and put on really very high-level productions, which we all learned from and grew from. When I look back now, all of those opportunities – the stage time, the discovering and delving into character, the performance –really accentuated and assisted my career as a dancer.

And I mentioned before, you were a recipient of the Harold Bantock Scholarship, which is really focused on rural students. What opportunity did that scholarship provide for you?

I was very fortunate. Anyone who thinks that I got a scholarship to Wesley because of my academic ability needs to think again. I was fortunate that a young fellow from the country who’d been awarded the scholarship, actually, wasn’t able to take it up for whatever reason. Clive Hamer, who was the Headmaster at the time, rang my parents and said: “Look, we have this scholarship. We know you’re members of the Methodist Church” – it was Methodist back then, Uniting now – and he offered Mum and Dad the opportunity for me to attend under the band scholarship, which would have helped Mum and Dad out and enormously. We were doing okay, but not by any means wealthy, so it was a great assistance. I’m sure that there are parents sitting there this evening, nodding their heads in agreement. You know the fact that there are people out there, donors and supporters, who are prepared to contribute to the next generation is incredibly valuable, incredibly important.

I’ve heard many, many times, including from elite athletes in contact sports, that the fittest athletes are ballet dancers. What was your experience of managing your body for such a long time?

Well, like any professional sportsperson there is a balance between high performance and maintenance of your body. When I first started and joined the Australian ballet at the age of 18 it was pretty basic, in terms of there being no physios onboard. Your best bet with an injury was a bag of frozen peas from the freezer. We’ve come a long, long way since then. Today, we have a world-beating dance medical team at the Australian Ballet. But, I guess the older you get, the more things you hurt. You learn to manage it. It’s also about looking after your colleagues as well, so everyone keeps an eye on each other.

How many days a week, how many hours a day, would a ballet dancer at the top of their game spend rehearsing and working on their craft?

On a normal day, you would be in there at 9.30am to start a class at 10.30am. That would go for an hour and a quarter. You’d have a 15-minute break between rehearsals, a lunch break, and then rehearse until 6.30pm. If you’re performing, you’d start a class at 11am, have a break between 3pm and 5pm, and you’d get ready for a show which begins at 7.30pm and could finish anywhere between 10.30pm and 11pm. So very up and down hours, stretched all over the place, but you kind of learn to love it. After a while, it’s just the way it is as a dancer. We also travel around a lot. I mean, I’m out of Melbourne six months a year, performing both internationally and within Australia. So it’s a crazy life, but we’re all in it together so it’s also a very exciting one. 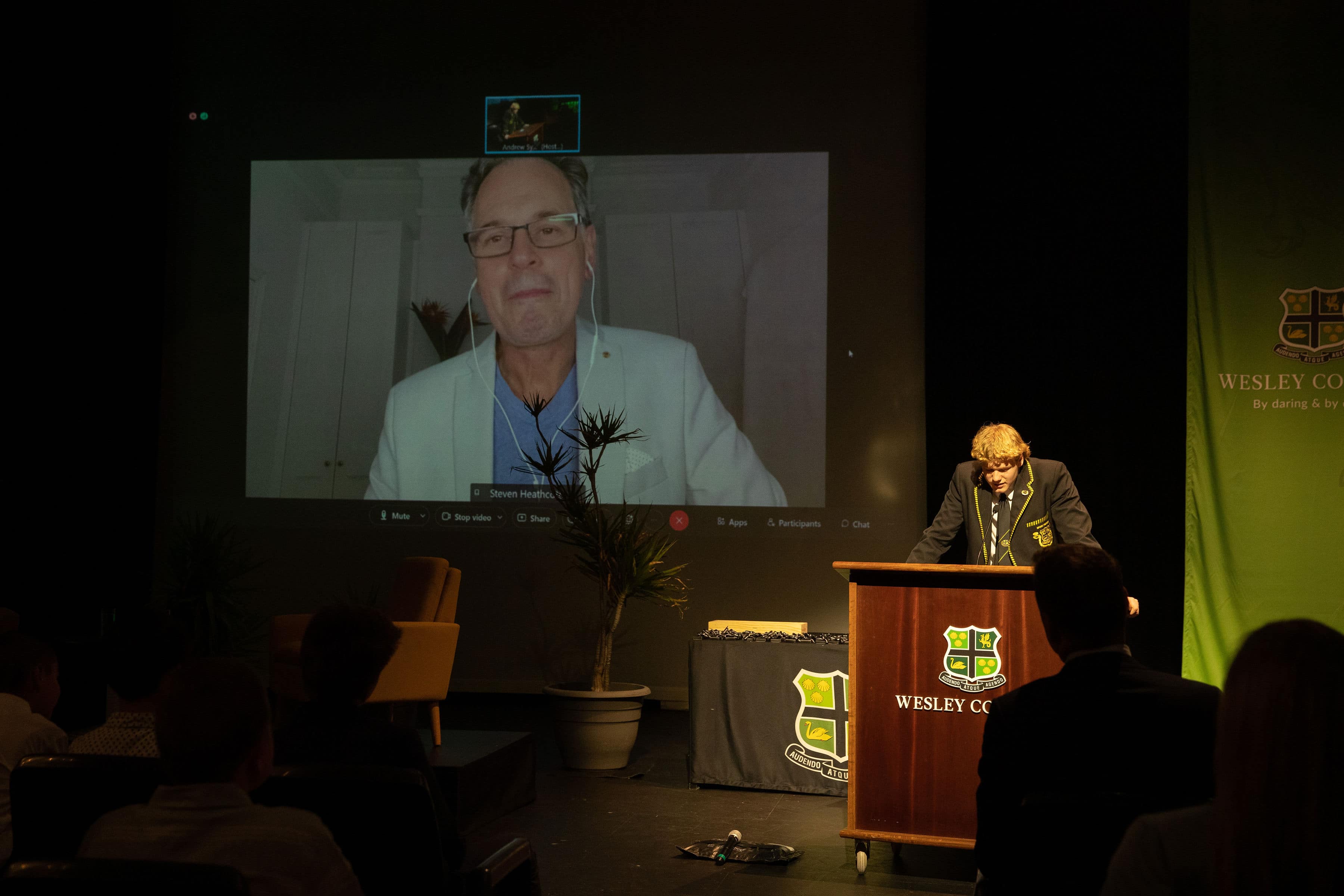 Now we’ve got two students who are going to ask some questions, starting off with Reuben who’s a year 11 student and then Alejandro from Year 6.

Reuben: Do you remember your first day at Wesley and what was that like?

Boy, that’s casting my mind back a long, long way Ruben! I don’t remember the whole day, but I remember feeling a combination of nervousness and excitement. There was a sense that there was just so much on offer and so much that I could become interested in. But there were definitely a few nerves but I think it’s absolutely normal for you to feel those nerves if it’s your first day at school. But I think it’s important to know that everything settles and everything finds its place after not too long.

Reuben:  What advice would you give your 13-year-old self?

Work harder? I’ve been asked this question before and it’s like, ‘there’d be a long list actually’, but one of the things I would say to my 13-year-old self is: don’t think that you have to know all the answers all the time because you can’t at 13. In fact, you can’t at 57, which I am now.

The other thing is, don’t be afraid to ask if you’re not sure. I think that if I had asked more questions when I needed to, I probably would have had an easier time academically. It wasn’t my strongest suit. I would always have gravitated towards the Arts, towards music, drama, art, all of that sort of stuff. That was just the way my brain was leaning. But I’m pretty sure that had I not assumed that I was supposed to know the answer to all things academic, and had I asked some questions at the time, I probably would have managed a little bit easier. So I think that’s my main takeaway to my 13-year-old self: ask questions.

Alejandro: What are the values that you learnt from your family and during your time at Wesley, that guided you throughout your career?

I was very fortunate to have a family who recognised quite early on that I had developed an interest in something which was a bit different. Certainly, at the time when I was growing up, not a lot of young guys did ballet. It didn’t really figure on the radar of most people. And I was fortunate that both my parents recognised that this was something that I had developed an interest in, particularly after this school excursion to the Perth Concert Hall, where I saw the Nutcracker and thought it was the best thing I’d ever seen, blew my mind. So I had their support to follow what I really wanted and I think that’s hugely important.